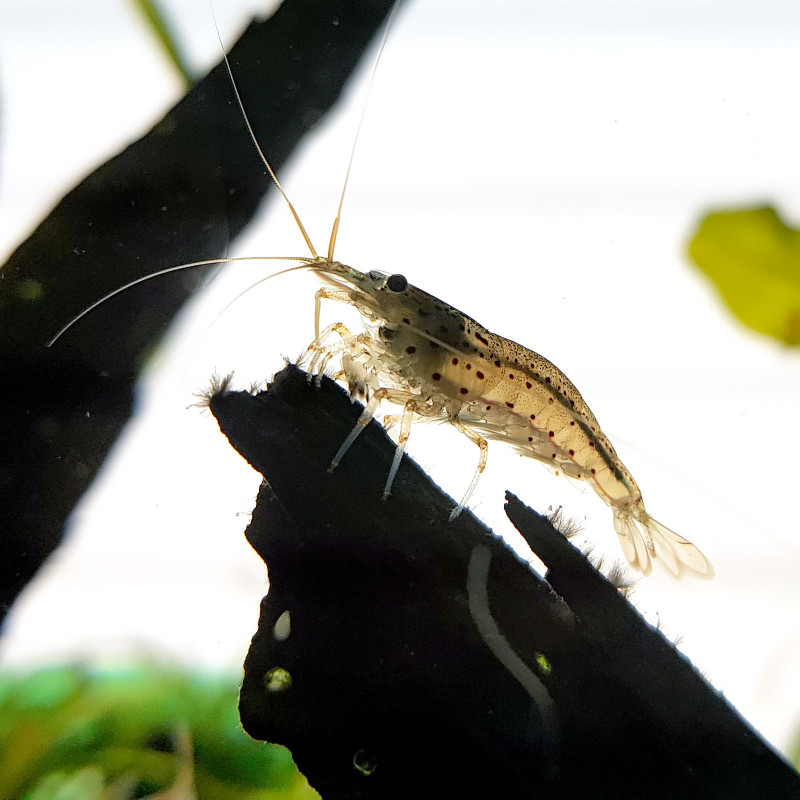 €3.95
Tax included
Amano shrimp (Caridina multidentata) or Japonica shrimp can grow to about 5cm. They are transparent in color and have dots and stripes on their bodies. Amano shrimp are known to be excellent algae eaters. They will feel at home in many different aquariums.

Amano shrimp (Caridina multidentata) or Japonica shrimp can grow to about 5cm. They are transparent in color and have dots and stripes on their bodies. Amano shrimp are known to be excellent algae eaters. They will feel at home in many different aquariums.

This shrimp species owes its name to Takashi Amano. He used these shrimps in all of his aquariums to naturally counteract algae growth. The shrimp are undemanding and adapt quickly. A pH range between 6.0 and 8.0 and temperature between 10 and 30°C presents no major problems. They are strong animals. Of course it is the responsibility of the caretaker of these animals to make them as comfortable as possible. An optimal pH is between 6.8 and 7.5. The temperature is ideally between 20 and 25°C. They actively contribute to the control of algae.

Appearance
Amano shrimp (Caridina multidenta) have a transparent body. Dots and stripes are present on this. A yellow stripe is visible on the top. Because they are not so striking in color, they are ideal for an aquarium where a natural atmosphere is desired. In the females an egg spot is visible in the form of a saddle on the back. Amano shrimp can carry a lot of eggs. The females can grow up to 7cm. Males stay smaller and grow to about 5 cm. They will scale from time to time to grow. Do not be alarmed if there is a skin of a shriveled shrimp in the aquarium.

Housing
These shrimp are easy to keep and don't need much. The aquarium should be at least 130 liters in size. Shelters are much appreciated. This can be in the form of plants, wood, stones or other crevices that they can crawl between. Moss and plants with fine leaves in their environment will make them feel safe. Existing plants will make the water quality more pleasant for them. In the moss they can search for food and shelter to their heart's content.

Behavior and fellow residents
Shrimp are real group animals. They use the presence of peers for a sense of security. So preferably always keep more than 5 copies together. They are almost constantly looking for food. Everything they walk over is plucked. They do not interfere with other fish, shrimp or snails and they are peace-loving. However, when feeding, they can react quite fiercely. Because this species grows somewhat larger, it is better suited to keep together with larger fish than other small shrimp species. Be careful with fish with a mouth big enough to fit a shrimp. If they are not eaten, they can live to be about 5-6 years old.

Nutrition
As mentioned, Amano shrimp are constantly scanning surfaces. Algae and other edible substances from the biofilm are eaten. They leave plants alone. Supplementary feeding is desirable if there are a relatively large number of shrimps in the aquarium. This can be done, for example, with sticks, granulate or pads from our range of shrimp feed. Catappa leaves, Walnut leaves and other natural materials can also be fed. Cooked vegetables such as carrots and spinach will also appeal. Keep in mind that they are small animals with small stomachs. Feeding too much is not desirable.

Breeding Amano shrimp
Breeding Amano shrimp is a challenge. They can carry large amounts of eggs. The larvae will be released, but will not survive in fresh water. They will serve as fish food or get into the filter. Brackish water is needed for the larvae to grow up. One way is to set a pregnant shrimp aside in a small aquarium or vase. The released larvae can be aspirated with a pipette. The larvae can be released in a pre-screwed aquarium with a correct salinity and excessive presence of floating algae. Over time, the larvae will need to be accustomed to freshwater. Not an easy job.