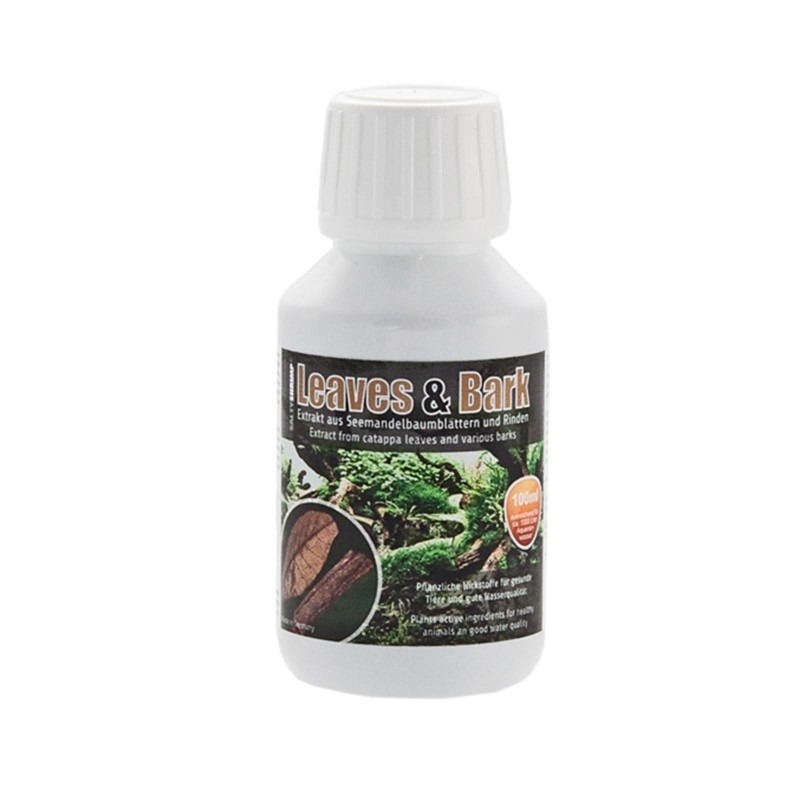 With Leaves & Bark, the valuable substances contained in Indian almond leaves and various barks are added, without the water becoming visibly coloured. They can help to balance your aquarium biologically and can even increase the animals' resilience against pathogens such as harmful bacteria or viruses.

With Leaves & Bark, the valuable substances contained in Indian almond leaves and various barks of mainly tropical trees are added, without the water becoming visibly coloured. They can help to balance your aquarium biologically and can even increase the resilience of the animals in your aquarium against pathogens such as harmful bacteria or viruses.

Indian almond leaves and various types of bark are very popular thanks to their positive influence and have been used in the aquarium hobby for years. Unfortunately, natural materials tend to release all the actives within a few days, which you remove with a water change. They are also broken down during the natural processes in the aquarium. What remains is dead organic material that slowly decays and is broken down over time by bacteria and other microorganisms. In addition, leaves and bark can discolor the water quite a bit, which is not desirable in every situation. With Leaves & Bark you can easily and comfortably replenish the positive substances without having to add new leaves or pieces of bark every week.

Indian almond leaves are harvested from the Indian almond tree, Terminalia catappa. They contain high amounts of various secondary phytochemicals such as flavonoids, humic acids (humic and fulvic acids), tannins, iridoids, pyrethroids and saponins. These substances are known to inhibit bacteria, prevent inflammation, aid tissue repair and protect the mucous membranes of fish and invertebrates, making them more resilient. In addition, they increase the readiness to spawn in shrimp and ornamental fish, they can prevent the eggs from becoming infected with fungi and they can have a supportive effect on the immune system in case of infections. They even have the ability to bind to toxic heavy metals in the water, rendering them harmless - for good water quality.

Nature's way of protecting trees is through their bark, where their defenses against outside pathogens and parasites are concentrated. Different types of bark are traditionally used as medicine and care product and with Leaves & Bark they have now been introduced into the aquarium hobby thanks to their many beneficial effects.

We use the bark of the African plum / cherry tree (Pygeum africanum), the cat's claw (Uncaria tomentosa), the lapacho tree (Tabebuia impetiginosa), the oak (Quercus) and the quebracho tree (Aspidosperma quebracho-blanco).

These different types of bark add tannins, humins, humic acids, calcium and magnesium, among other things. They are especially appreciated for their anti-inflammatory properties, but they can also have a positive effect on fertility, optimize the digestion of your aquarium animals, fight fungi and parasites, inhibit viruses and strengthen the immune system of your aquarium inhabitants.

Flavonoids
Water-soluble flavonoids are actually plant dyes, which play an important role in plant metabolism. They protect it from damage by microorganisms and insects. In the aquarium water, flavonoids can have an anti-allergic and anti-inflammatory effect.

humic acids
Humic acids, dark in color, are formed during the decomposition of organic matter. They have a very beneficial effect on many vital functions in shrimp and fish, but they can also lower the pH of the water, bind to toxins and increase the overall well-being of the animals in the aquarium.

Tannins
Water-soluble tannins are tannins produced by plants and they are found in high amounts in Indian almond leaves, for example. They can significantly reduce the bacterial count in the water.

Saponins / Triterpenoids
Saponins/triterpenoids are active substances found in many medicinal plants. They can strengthen the immune system, are anti-inflammatory, dissolve mucus and stimulate the production of hormones. In addition, they can increase the absorption of other substances in the gut.

What are the effects of Leaves & Bark?

Against bacteria
The active substances in the Indian almond leaves and bark used in the production of Leaves & Bark inhibit bacteria and can even kill them. This effect is mainly caused by flavonoids (such as quercetin and kaempferol).

Against inflammation
Leaves & Bark can be used to stop inflammatory processes thanks to a whole range of different highly active substances: flavonoids and tannins, but also triterpenoids / saponins.

Against free radicals
Tannins can have a strong anti-oxidative effect, they can be used to absorb the highly reactive free radicals, atoms or molecules that would otherwise wreak havoc on the organism. Tannins are very effective at binding to them, rendering free radicals harmless.

For the mucous membranes
Tannins have a slightly astringent effect as they react with proteins in the mucous membranes, making them less penetrating to microorganisms and parasites - a great prevention for fish white spot disease and many bacterial infections.