With all of the necessary technology in house, we can now keep ourselves busy with the fun part: the design of the aquascape. With hardscape, all the hard materials used in the décor of the aquarium include. In the basis can be chosen between wood or stone, or a combination of both. If it is right, the choice is already made thanks to the inspiration of the previous pages. The hardscape is a not to be underestimated value for an aquascape. If the hardscape is not correct, will be the aquarium, there are also less nice to look at. By here pay much attention to it, that will be the end result, therefore, always be of benefit. Remember: the impressive on a mountain, crags, etc. its not the plants, but the formation and appearance of rocks. It goes without saying that when a natural appearance is the goal, that there is then also only with natural materials.

Choosing the type of wood

Not all wood species are suitable for an aquarium, because they float, rot or substances to the water can give. On the webshop are various types of wood to be found that would be suitable for use in an aquarium. Each with its own characteristic properties. Choose one species because multiple species will become restless and unnatural in a layout. An absolute value of the wood, when a lot of details. A lot of coils, knots, holes, branches, texture and whimsical shapes make for an impressive character. Zaagvlakken are unnatural and disturbing. That will, therefore, preferably at least present. Avoid as much as possible, that the zaagvlakken in the view in the layout. One other important tip: buy better-three small pieces than one large piece, and combine these together into a single whole. With multiple loose pieces of branches are much better rotated and positioned. Branches can then to the millimeter to be placed, so that the composition with more perfection can be built. And it is true: the more branches, the more detail can be applied. Spiderwood let, for example, be easy to prune with a pruning shear. The individual branches can then here and there are bijgestoken. Purchase in doubt, always more than seems necessary. Another great added value of wood is that it can grow with mosses and ferns, which is a very natural impact on the layout!

Note: Some types of wood sink is not directly in the aquarium. So make sure that the wood is soaked or with a stone, and tie-rips is reinforced, so that the wood is not up can arise as soon as the aquarium is filled. Wood gives, in many cases, substances into the water, causing the water to discolour and the pH may be lowered. This can't hurt and will over time decrease.

Choosing the kind of stone

There are many types of stone that can be used in an aquarium. That offers so many opportunities for a unique look and feel to the aquarium. Each stone has its own characteristic features. Stones are fascinating, because they are very old and are by nature formed for special objects. The influences of time and nature are there to be found. In the case of stone, for example IJslandlava is to see how the stone once liquid has been. With stones of Petrified wood are again veins and timber projects to discover and this speaks to the imagination. The opinion is a kind of stone to choose from that fits the intended atmosphere of the layout. If the aquarium is placed in a room with a lot of warm tones in the interior? Then, for example, can a stone be chosen that matches. Use in any case never more than one type in a layout. There is the restless and looks unnatural. Is budget an important factor for the purchase? Choose a comparatively less heavy rock like Dragon Stone or IJslandlava.

When the stone is chosen, it is important to have copies of various sizes are available. Different sizes make for a playful whole. With a few small stones can also have extra details to be applied. This can also serve to support obliquely angled stone or to stone, a bit high. A mountain may be composed of a number of loose stones, which the illusion is created that it is one big mountain. Construction so always room to play with enough material to choose from. With the expectation that there is 15kg of stones will be needed it is smart to than 20kg to order. More choice comes the end result is always good!
Iwagumi: In an Iwagumi layout is the main stone (Oyaishi) of great influence. The most beautiful and largest stone must be so depressing! In an Iwagumi, the second stone a little less large and a corresponding appearance. The rest of the stone to accent the two large stones, and bring the composition into balance. Care, however, always an odd number of stones and avoid symmetry.
How many bricks will ultimately be needed, is strongly dependent on the type of layout. Some examples are found here to estimate: Hardscape examples

Caution: Some surfaces give lime to the water. This is the GH of the water affected. This need not be problems, but it can be a challenge for people who have no grip on the water quality. Many block of, for example, Seiryu stone, it may be useful to a Osmoseapparaat disposal. 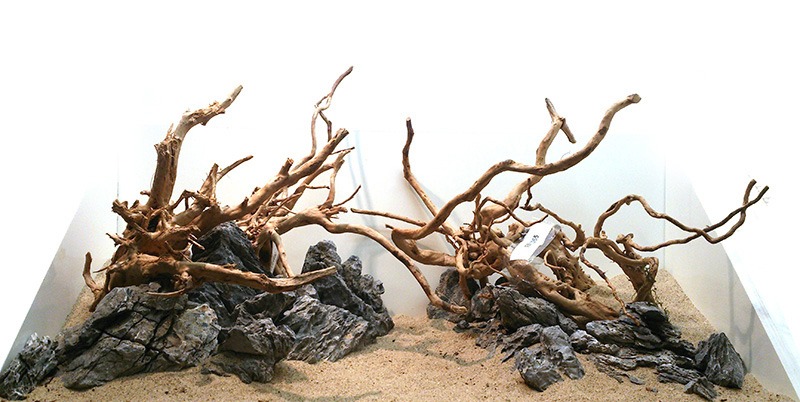 Preparation of a layout

Before the actual aquarium to focus on the battle in a bowl with sand. Or use a box of the same dimensions as the aquarium and try different setups. Learn about the stones and the wood "to read". Means, for example, the lines of the different stones in the holes. These should be parallel to each other and to each other not to cross it. For example, a natural "flow" and dynamic to the show, to be disposed of. In nature, stones in the landscape carved by o.a. streams of water and are always in the same direction is formed. Evaluate each stone on his best face, and note the center of gravity. The thick part, the mass, light, always down, the mountains are at the bottom always wider and rolling stone lands never at a point. Be stone wrong to put, looks always unnatural. Try multiple setups. Especially for the novice aquascaper, it is very instructive to this exercise. Experiment with what does or does not work, be creative and challenge yourself. Create interim pictures, because on a photo it looks sometimes just different. (Also read: The art of the aquarium setup). Is the layout set up in the rehearsal room? Then the real work began.

Stones on the web shop to order, can be pre-rinsed, but is not necessary. Boiling is unnecessary. The wood has to be secured that it is not up to float and after further setting up. This can be by means of watering in a bucket or bathtub. Warm water helps to zinkproces to accelerate, boiling is not advisable. When in doubt, or it will float or not, the wood can be weighted with stones and tie-rips. Once the layout is known, and the wood is ingewaterd, can also possibly moss on the desired spots on the wood are bound. That is now going to be easier than when the soon in the aquarium is. (however, the moss keep moist by damp paper towels around it to wrap).